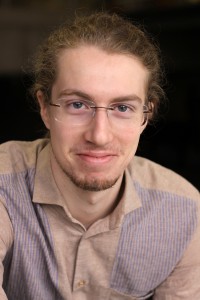 Mooring in Halifax in 2010 to enroll at Dalhousie University, Benjamin Marmen and his cello have since sought to become dynamic contributors to the city’s musical life.

A small-town boy out of Grand Bay-Westfield, NB, Benjamin began cello lessons at age seven with Sonja Adams in Saint John. Throughout high school he performed with Symphony New Brunswick as a substitute, with the Early Music Studio in SJ, and also with provincial and national youth orchestras.

In summer programs such as Le Domaine Forget, Scotia Festival, and the National Arts Centre’s prestigious Young Artist Program, Benjamin has received instruction from acclaimed cellists such as Lynn Harrell, Philippe Muller, Hans Jørgen Jensen, Denise Djokic, Paul Marleyn, Blair Lofgren, and Thomas Wiebe. However, his most cherished mentorship has come from Shimon Walt, under whom Benjamin recently completed his Bachelor of Music.

During his studies, Benjamin produced himself on stage with various ensembles –Scotia Festival’s “Chamber Players,” his sixteen-stringed clique known as Quartet LaCorde, and Symphony Nova Scotia, recently awarded the position of section cello. He also performed as a soloist with two of the local orchestras, Chebucto Symphony Orchestra and Nova Sinfonia, and was programmed as a soloist with SNS as one of the winners of the NS Youth Orchestra’s 2014 Concerto Competition. Benjamin has performed throughout Nova Scotia, notably as a guest artist in Mahone Bay’s Music at Three Churches, in Tatamagouche in Bonnyman House Tearoom’s concert series, as well as in New Brunswick as part of the Musique à l’église historique de Barachois.

Away from the classical stage, Benjamin has taken part in a variety of musical ventures, such as taking to the stage with Natalie MacMaster and her band at the 2013 ECMAs, as well as performing and recording with various local artists, such as guitarist Maxim Cormier, winner of a 2013 NS Music Award, and the popular singer-songwriter Mo Kenney. He has played on film soundtracks by local composers Blain Morris and Josh Cruddas, as well as in a short film by Halifax director Dillon Garland.

Through his interest in new music and improvisation, and thanks to suddenly LISTEN and Upstream Music Association, he was involved in improvised concerts by Montreal’s Musique Actuelle, played in workshops with composers and improvisers such as Danielle Palardy Roger, Jean Derome, and Joëlle Léandre, and has also appeared as a soloist in Halifax’ Open Waters Festival.

Benjamin plays a German violoncello made by Jacobus Staininger in 1779, which has graciously been loaned to him by Katharina Kieser and her family.

Participating in the festival every year for about eleven years directly helped in preparing me to enter and complete a music degree, and the benefits of those years surely continue to play a part of my every day now, playing in a professional orchestra.

The festival provided me with an incentive every year to choose, learn, and refine new repertoire, due in part to my teachers always being keen on my participation (probably because they soon discovered my competitive side and realized it was a useful tool to get me to practice). It was in these times that I began to learn how to practice effectively, sometimes out of my own motivation, but, admittedly, mostly out of my parents’ urging.

By participating in the festival, not only was the foundation laid for the practicing and learning skills on which I now rely for my work, but I was given the irreplaceable opportunity to get up and perform for a real-life, appreciative, yet also expectant, audience. Nerves and stage fright can long remain a debilitating problem for musicians, even for some professionals, so I’m thankful for the ample opportunities I had to perform at the festival, which both helped me learn to be less nervous, and gave me experience in coping with the array of problems that can come when you’re nervous about something.

I also benefitted from getting to listen to my peers perform from year to year and being inspired by their abilities and maturation. It’s one thing to get inspired by a world-class performance by, say, Lynn Harrell, go home and practice lots, realize that you still don’t sound anything like what you just heard, and gradually let the ambition fade. It’s another thing to hear Johnny from your class play with a particular sparkle or finesse, go home and practice lots, and say, “Hey, I think I’m starting to achieve what I was hearing!” then be motivated to keep practicing. Always being reminded not to compare myself to others too seriously, I think the festival helped provide the inspiration to reach the next level, as well as realistic measurements of improvement from year to year.

Of course, the feedback from the adjudicators and the reward of prizes at the end of the festival was a healthy way to keep progressing musically. The constructive comments and suggestions from the adjudicators would always open my eyes to new ways of approaching something, or it would simply raise my standard and make me say, “Wow, there’s a whole new depth of playing this instrument and learning this music that I didn’t even know about. I want to explore more and work harder at this.” There were definitely times when I would take comments the wrong way, and I would feel like I wasn’t doing anything right, and I have to credit my parents and teachers for helping work through the disappointment or discouragement and find motivation instead.